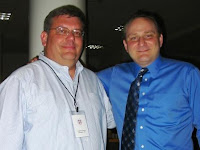 Last year's passage of the UIGEA has caused a lot of confusion by putting online poker in a grey area. There is no existing law that criminalizes the playing of online poker. While technically the bill did nothing to create new crimes, many online cardrooms and financial institutions have shut out U.S. players. Others, such as Doyle's Room have first left the U.S. market then re-entered with new software.

Robert and Andy were visiting with congressmen and staffers to encourage congress to solve this problem by clarifying through legislation that poker is a game of skill and should be be exempt from the UIGEA.

You can join in this effort by asking your congressman to co-sponsor the Wexler bill the Skill Game Protection Act, H.R. 2610.
Posted by Big Jim Slade at 9:37 PM No comments: