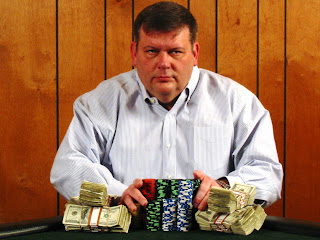 Just outside of Washington, D.C. in Northern Virginia, the Nova Poker Championship was held. In Virginia, home poker tournaments are legal and many homes are filed each week with groups of poker players playing cash games and participating in Texas Hold'em Poker Tournaments. One of the larger gatherings is the Nova Poker Championship which this year boasted a $150K prize.

The two day event ended when Robert went all-in against his opponent to finish first in the two day tournament.

For the winning hand Robert was dealt 10d 4d, suited. His opponent had As Ks, a powerful hand also known as Big Slick. The flop came out Ad 10h 4c. This gave Robert's opponent a pair of Aces, top pair, with a King kicker, top kicker. Top pair with top kicker bet, Robert raised with his two pair, was re-raised all-in and Robert called to win the tournament with two pair.
Posted by Big Jim Slade at 11:04 PM No comments: