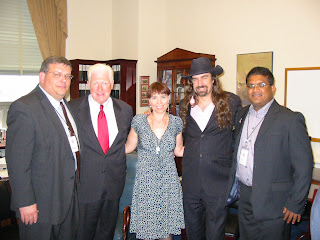 The UIGEA was passed last year as part of the Port Security Bill. While poker has absolutely nothing to do with port security, the UIGEA was added at two in the morning to a bill that had to be passed. This meant that the bill was passed without debate or review.

The UIGEA would not have passed as a stand alone bill, but was snuck into the Port Act in the middle of the night on the last day of the session. Concerned about how this circumvented the normal legislative procedures, Rep. Moran said "Anyone would be concerned about the process."
Jim mentioned that his granddaughter's favorite poker player is Annie Duke, who was present for the meeting. Jim expressed his support to allow American Poker players to participate in their favorite game online. Said Robert Costner, who is from the Arlington area, "I can have any number of people come to my house and play poker legally for $20 or $20,000 dollars. But as soon as everyone leaves and I go online to play poker the federal government wants to oversee the situation."