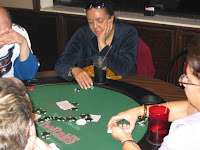 Recently I was asked the question "In the Red, White, and Blue Poker League tournaments, do you use the same rules as the World Series of Poker?"

The actual situation was that I was chipping up players, I needed to move someone to balance tables, I had a handful of chip racks and I was walking by when someone stopped me and asked a question about how to apply a particular poker rule in the current hand. I don't recall the actual question, but this got several people all asking me questions at once and culminated in a non player who was standing near the table asking first if the poker rules are on the website, and secondly if we use the WSOP rules.

The situation was hectic, confusing, and it was clear to me that he was not going to get the answer he wanted, so I suggested we have the conversation another time. I could not understand what he was looking for and hoped to resolve it later.  It didn't happen that way.  :)

But, the concept of poker rules is of interest to many players.  I'd be happy to provide an answer, but I am just not sure of the question.

What I am trying to say is that the actual question, do we use the WSOP rules has little validity unless it is put into context. We use generally accepted poker rules, such as are found in casinos.


All the casinos then have their own implementation of the rules.  Harrah's, Showboat, Caesars, and Bally's are all owned by Harrah's Entertainment, as is the WSOP.  The rules vary slightly from Harrah's/Showboat to Caesars/Bally's and then to the WSOP.  On top of all this is the Tournament Directors Association (TDA) which votes on and publishes it's own set of poker rules.


But this is not the gobblygook you were looking for.  You want something solid to go home with.


Our tournaments differ from WSOP rules in the following:
I'm sure there are a hundred or so other variances, but I'm not going to list them all here.
So an answer is yes, as long as you accept the hundred or so ways our rules are not the same as the WSOP, we play by exactly the same rules as the WSOP.
Posted by Big Jim Slade at 3:25 PM