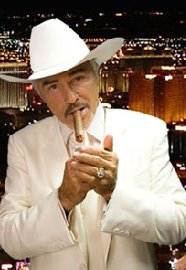 LOS ANGELES, April 10 /PRNewswire-FirstCall/ -- The WORLD POKER TOUR(R) will get its first Hollywood close-up with a starring role in the upcoming "Deal," filming this month in New Orleans. WPT fans will ultimately get to see hosts Mike Sexton, Vince Van Patten and Courtney Friel playing themselves, alongside the film's stars Burt Reynolds and Bret Harrison.

Produced by Michael Arata and Louisiana-based Crescent City Pictures,"Deal," directed by Gil Cates Jr., can be characterized as "The Color of Money" meets the poker world. It tells the story of an ex-gambler played by Reynolds, who teaches a hot-shot college student how to "play the player," instead of just the cards. Bret Harrison, who stars as the college student/online wiz, is the star of Fox Network's comedy "The Loop." The film concludes at the WPT World Championship(TM).

Veteran actor Charles Durning is part of the cast, along with poker aficionado Shannon Elizabeth and WPT stars Phil "The Unabomber" Laak and Antonio "The Magician" Esfandiari.

"Deal" will film its WPT scenes immediately after the April 18-24, 2006 WPT World Championship(TM), the $12-$15 million finale to the 17-event WORLD POKER TOUR Season IV. At the close of the tournament, after the new WPT World Champion is crowned at Bellagio in Las Vegas, and awarded his $3+ million first prize, the set will be loaded up for transport on the WPT 18-wheeler and trucked down to New Orleans.

"We are very excited about the WORLD POKER TOUR leaping from the smallscreen to the big screen," says Steve Lipscomb, founder and CEO of WPT Enterprises, Inc. "'Deal' will bring our enormously popular show on the Travel Channel to an even greater audience and we hope that it continues to fuel the explosion of poker worldwide."

Movie Synopsis
Set against the world of high stakes poker, DEAL follows the story of TOMMY (Burt Reynolds), an ex-gambler who meets up with ALEX, a hot-shot, card playing college student and teaches him to “play the player”, and not the cards. After a falling out, the aging pro returns to the game he left 30 years ago and now must face his protégé in the finals of the world series of poker.
Posted by Big Jim Slade at 1:07 AM