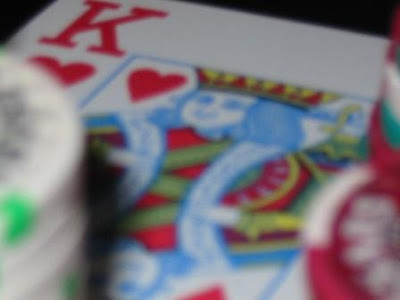 I drove up to Bally's in Atlantic City this afternoon to play in the WSOP Circuit event at Caesars this week. I decided to go eat the comp buffet at Showboat, and while there play a little poker.

Lately for some odd reason, I've been afraid to play cash games. For about a year now. It's been several months since I've played last, maybe late last year. I'm fine with tournaments, but I have been doing nothing but losing in cash games lately.

(The photo was taken by me in my room tonight. It is a Copag card sitting on a table in the room at Bally's with Caesars chips.)

I bought in for $200 in a $1/$2 No Limit Poker game. Tired as I was, I still wanted to play at least one hour. Seventy minutes later I had just finished losing $80 in the last two hands I was in, plus initial bets in several hands I folded. I chipped up to greens and went to the cage.

After an hour I had $298, which means I made $98 in that short length of time. I'm trying to teach myself that when I am tired to get up and walk away with my winnings, while I still have winnings. 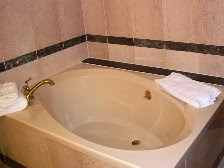 The room is great. Bally's has me in the Bally's tower. Try to avoid the Claridge and Dennis towers. I have a king bed, windows on two walls - a view of the beach and the hotels on the strip. The bathroom is upgraded with a glass enclosed shower and an oversized oval tub. I'm using wired internet, which I prefer over WiFi.

WSOP in the morning.
Posted by Big Jim Slade at 1:17 AM