Tonight at the tournaments at Whitlow's on Wilson, the owner of http://www.nolimitchips.com/ came by and dropped off several decks of cards for us to use and test. Currently, we are using Copag cards. He brought by two decks of Gemaco and two decks of Modiano cards. Though I have not played with them, I like the look and feel of them. He stocks the cards locally and sells them from his website. 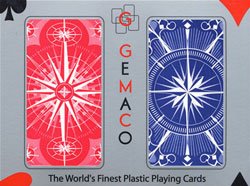 One of the decks of Gemaco was open when he brought them, though I do not recall which one. I put these cards into play in the second tournament we had at 9:00. About an hour later as I was walking by a table, I noticed one of the cards in the deck in the dealer's hand was marked by bending back the corner. As it turned out, it was an ace. I don't think it was an accident, though it could have been done prior to me receiving the deck. But it does make me want to go through all the decks I have and see if we have marked cards.

In the meanwhile, please leave your comments on what you think of the different brands we are using. We have removed all the original "Vegas" brand cards we had. These were replaced with Copag and Sunny. Now we also have Gemaco and Modiano that we play No Limit Texas Hold'em poker tournaments with.
Posted by Big Jim Slade at 2:20 PM